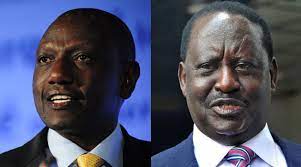 The latest political polls released on Tuesday, June 21, 2002, by a research firm TIFA, paint a picture of a clear “win” for one of the presidential candidates. The polls reveal the popularity of the candidates in the county as follows; the Azimio One Kenya Alliance Presidential candidate Raila Odinga at 50%,  Kenya Kwanza flag bearer William Ruto at 25%, and the Roots Party of Kenya presidential candidate Prof. George Wajackoyah is at 7% while 18% of the respondents were undecided.

“This clear popularity gap of both ODM and Azimio is also reflected in the support-distribution for the main presidential candidates, with ODM’s Raila Odinga’s at twice the level of UDA’s William Ruto (50% vs. 25%),” TIFA stated in the poll.

The coalition working as, “ODM and Azimio la Umoja are both more popular than their rivals, UDA and Kenya Kwanza, though interestingly the proportion of self-association/identification with formations/coalition is greater than for political parties. A total of 70 percent for the former vs. 63 percent for the latter.”

Interestingly though, the percentage of the undecided voters went down by 7 percent from the previous survey.

Do you agree with the polls?