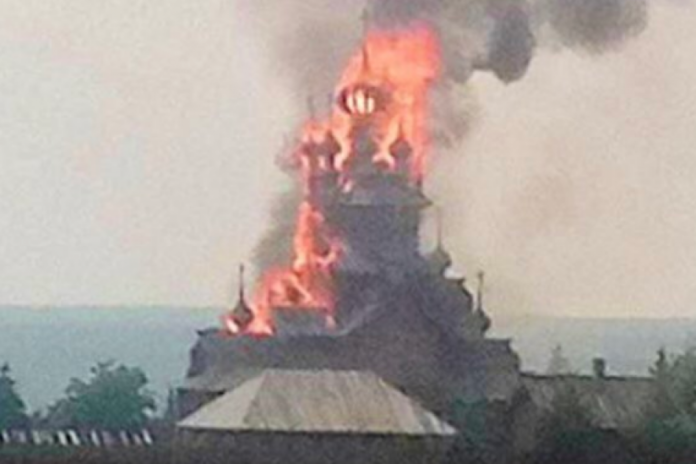 The Ukraine President Volodomyr Zelensky has accused Russian artillery of shelling an early 17th Century Orthodox monastery in the east of the country. Video footage shows the wooden Svyatohirsk Lavra Monastery engulfed in flames on Saturday.

The complex belongs to the Ukrainian Orthodox Church of the Moscow Patriarchate and lies near Russian positions in eastern Donetsk.

President Zelensky wrote : “Russian artillery struck the Svyatohirsk Lavra in the Donetsk region again today. Destroyed All Saints Monastery. It was consecrated in 1912. It was first destroyed during the Soviet era. Later it was rebuilt to be burned by the Russian army.”

Calling for Russia to be expelled from the United Nations cultural agency UNESCO, President Zelensky also alleged that two monks and a nun had been killed at the site on an earlier occasion during shelling on June 1 :

“Every church burned by Russia in Ukraine, every school blown up, every destroyed memorial proves that Russia has no place in UNESCO.”

Russia’s defence ministry denied the claim and accused Ukrainian troops of setting fire to the monastery before retreating.

The Svyatohirsk Lavra monastic settlement dates back to 1627. The All Saints Monastery was built from timber in 2009 to replace the earlier structure which was destroyed in 1947.