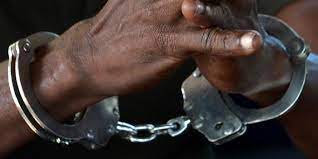 Evans Kebwaro, the man accused of orchestrating murders in Mawango Nakuru County has been arrested in Keroka Kisii County along with five of his accomplices after an elite team of Crime Research and Intelligence Bureau and their Special Services Unit detectives tracked him down at his hideout.
The arrest solves the puzzle of murders that have occurred in the region in recent times with authorities indicating that Kebwaro committed three murders within a span of one month in June.
Special Services Unit said that they have since established that the mastermind is a jailbird with a criminal past, who has previously been convicted and served sentences in prison. The arrest of the main suspect and his gang comes barely 24 hours after a high-powered security meeting that was held in Nakuru led by the cabinet secretary for Interior Dr Fred Matiang’i, following a presidential order.

The six are currently being held  DCI headquarters for a more comprehensive forensic examination at the DCI National Forensic laboratory, before a detailed report is released to the public. With the arrest of the mastermind and his cabal of thugs, DCI reassures Nakuru residents of their safety and security, as the agency up scales its surveillance in the city for the remaining pockets of criminals. As always, we thank members of the public and the local community for partnering with us and volunteering information leading to the arrest of the suspects.