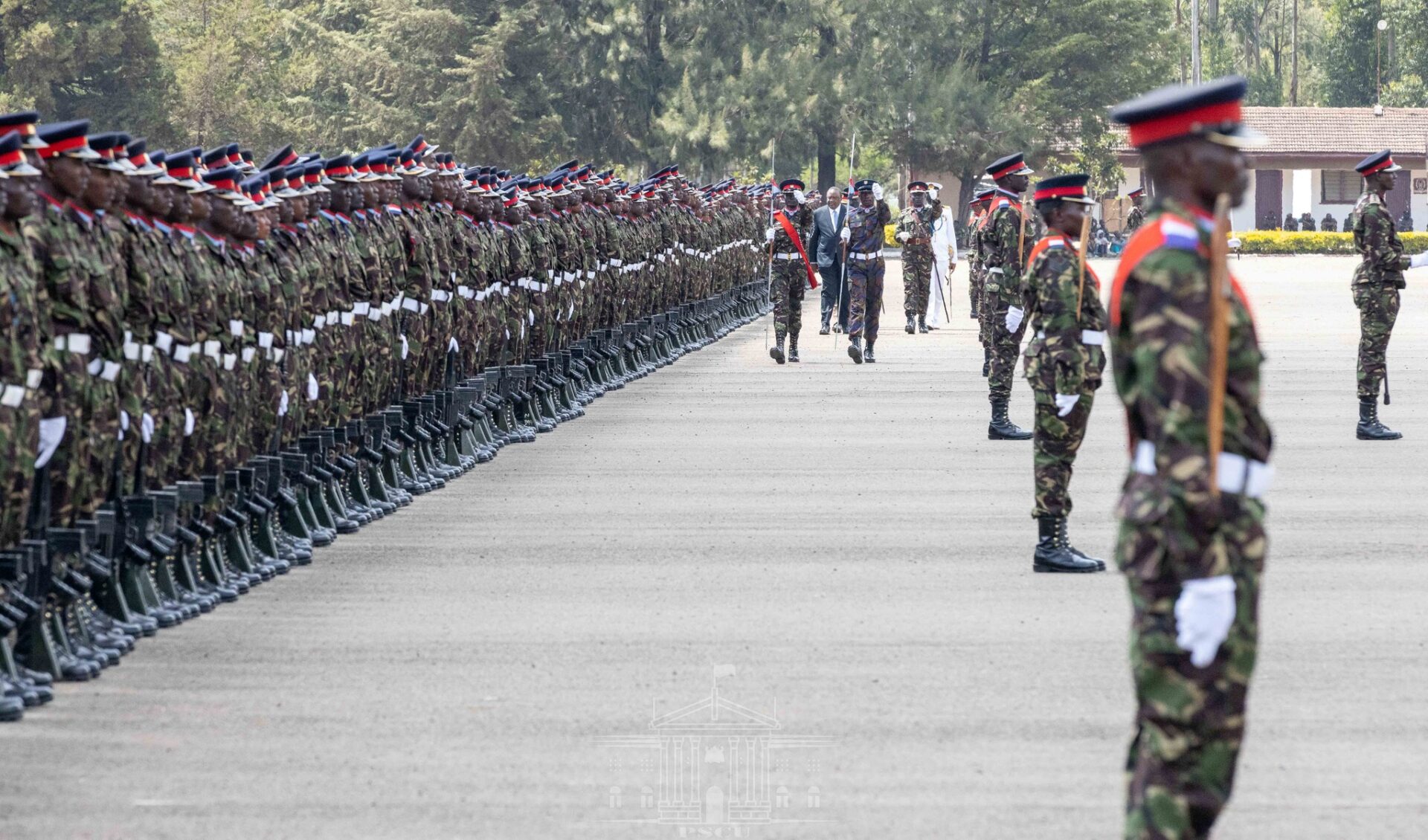 President Uhuru Kenyatta has commended the Kenya Defence Forces (KDF) for its commitment to serving beyond its core mandate of defending the country against external aggression.

The President pointed out that as a modern and versatile military, the KDF has embraced unfamiliar nation-building roles and excelled in them.

“Due to your record of delivering superlative results, I have tasked the KDF from time to time to take charge of various strategic national programmes and even to rescue failing institutions.

“You did it with the revival of almost 600 kilometres of the dead Metre Guage in an impressive manner, ahead of schedule and within the budget,” the President said.

President Kenyatta spoke Friday when he presided over the passing out parade of KDF recruits at the Recruits Training School (RTS) in Eldoret, where he congratulated the graduands for completing a rigorous six months basic military training course.

The President also cited the revival of the Kenya Meat Commission into a profit-making enterprise in record time and the Kenya Shipyard Limited that is poised to be the largest shipyard in Sub-Saharan Africa as some of the KDF’s achievements in supporting the country’s development agenda.

Other KDF achievements include the building of the Uhuru Gardens National Monument and Museum in only 22 months instead of 10 years as well as the increased access to basic health services for Nairobi residents done by the Nairobi Metropolitan Services (NMS).

“You also did it for the nation when you anchored our national response to Covid-19 pandemic; and in moments of national disasters and civil emergencies, your efforts saved lives and property,” President Kenyatta said.

He appreciated Chief of Defence Forces Gen Robert Kibochi, Service Commanders and all officers serving in the senior ranks of the military for their outstanding stewardship of the KDF.

Highlighting the steps taken to modernize KDF, the President said the Government has invested heavily in the training of officers, providing ultra-modern equipment, improving healthcare facilities, accommodation, remuneration and the overall terms and conditions of service for the military.

“Over the last nine years, in recognition of the importance of peace and security to the realization of our development agenda, we have undertaken the most consequential and expansive modernization of our military in our nation’s history,” the President said.

In addition, President Kenyatta said the Government enacted a law that creates safeguards for the KDF officers in their retirement and also facilitates the integration of those incapacitated or severely wounded in the course of duties.

“To seal this guarantee, on 15th of June this year, I had the rare honour and privilege of assenting into law the Military Veterans Act,” he said.

Noting that the political tempo towards the upcoming elections is nearing fever pitch, President Kenyatta urged all Kenyans to reflect on the sacrifice made by KDF officers in their service to and in defence of Kenya by putting the interests of the country first in everything they do.

“Over the last 9 years, some of the most agonizing decisions were the ones that would put our soldiers in harm’s way.

“They were tough decisions because the officers are our children and when they go out for any mission in defence of our borders at home or abroad, I knew too well that they would either return hoisting our national flag; or return wrapped in our national flag,” the President said.

Earlier when he arrived at the Recruits Training School, the Head of State officially opened the new ultra-modern Eldoret Regional Hospital that will cater for the health needs of officers serving in the North Rift, Western and Nyanza regions.