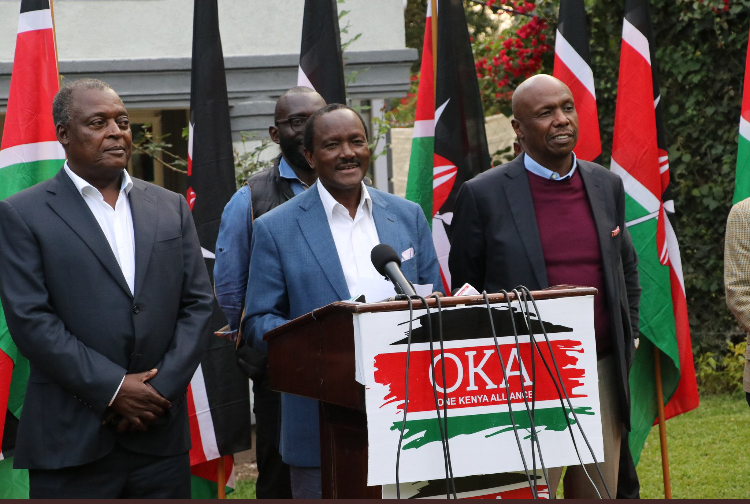 One Kenya Alliance (OKA) principals are finally joining Azimio La Umoja after weeks of speculation on which way they were headed.

On Friday evening, OKA principals led by Wiper’s Kalonzo Musyoka, KANU’s Gideon Moi and Cyrus Jirongo of United Democratic Party (UDP) said they are in talks with Jubilee and ODM to form a giant alliance.

“OKA is in talks with Jubilee and ODM to form a coalition to be known as Azimio One Kenya Alliance,” Kalonzo told a news conference late Friday, flanked by his co-principals.

Kalonzo Musyoka declared that the grand coalition will be unveiled on Monday when they sign the coalition agreement.

“I think from that statement we can see there is nobody swallowing OKA, we stress equality of partnership. We cannot be swallowed. I am quite sure that it is very good for our country’s unity of purpose and so we are rearing to go,” he said.

And he insisted that OKA will still field a presidential candidate who will be unveiled in due course, sending Kenyans into more confusion given key players in Azimio-ODM and Jubilee-have already settled on Raila Odinga as the flag bearer.

On Saturday, ODM and Jubilee will hold separate National Delegates Conventions (NDC’s) to ratify various resolutions, key among them being projecting Odinga as the coalition’s presidential candidate.

The two parties have already signed coalition agreements with more than 15 parties.