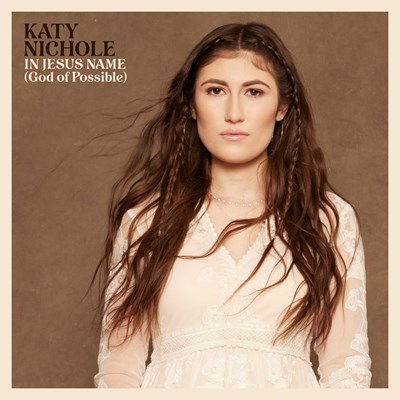 Nashville, TN (February 3, 2022)
Singer/songwriter, and new Centricity Music signee, Katy Nichole has not only gone viral, now reaching well over 150 million people with the chorus to her debut single “In Jesus Name (God of Possible),” but she has also reached the second highest position on the iTunes overall Top Songs Chart while remaining No. 1 on the iTunes Christian & Gospel Chart since the song’s release.

Created from words in 21-year-old Katy’s prayer journal that were written in the midst of a global health crisis and in response to her own story of suffering, hope and healing, “In Jesus Name (God of Possible)” has further world-premiered on Christian music’s largest radio network, K-LOVE. The network was made aware of the viral song, and unsolicited, played the song during the afternoon drive show January 31. The video has since received more than 2.3M views, 381K likes and 14K comments and shares on TikTok and another 1.8M views, 59K likes and 14K shares on the K-LOVE Facebook page.

Sharing her unwavering belief in God’s ability to heal and the power of prayer, Katy’s debut single is connecting with audiences around the world who are looking for healing and restoration in a weary and anxious world. In just a few short months following her post of the “In Jesus Name (God of Possible)” chorus on TikTok, the song had been heard more than 80 million times. The chorus was inspired by one of Katy’s multiple journal entries that proclaims, “I pray for your healing / That circumstances would change / I pray that the fear inside would flee / In Jesus name / I pray that a breakthrough would happen today / I pray miracles over your life in Jesus name.”