The politics of opinion polls in Kenya 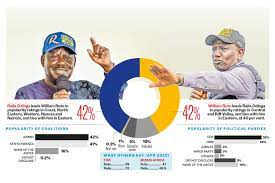 As a country we are set to hold a General election in less than 2 months, the date is already set August 9, 2022, and as this date approaches, we have witnessed the number of opinion poll firms and findings also increase. However, what is of interest is that the findings even though collected and done during the same period of time, the results considerably vary on some aspects.

Opinion polling is so politicised in this country that the majority of the public do not believe the data. The polls that have been released thus far have variations in findings on the same question that is posed to respondents. For instance, in all these surveys, respondents are asked: “If elections were held today, who would you vote for as president?” Answers to this question has varied considerably even where the firms conducted the surveys during the same period.

Why the disparities in opinion polls? Does politics influence the outcome?

https://familynews.today had an exclusive interview with a market research professional Maggie Ireri who is the Founder and CEO of TIFA Research Limited, an African based full market research company offering market, social and political research to understand the significance of opinion polling during elections and if such findings influence the voter choice?

This is the second episode in a series of What’s The Point interviews that focus on individuals who play a critical role towards the August 2022 General Elections.

Watch the One on One interview here: