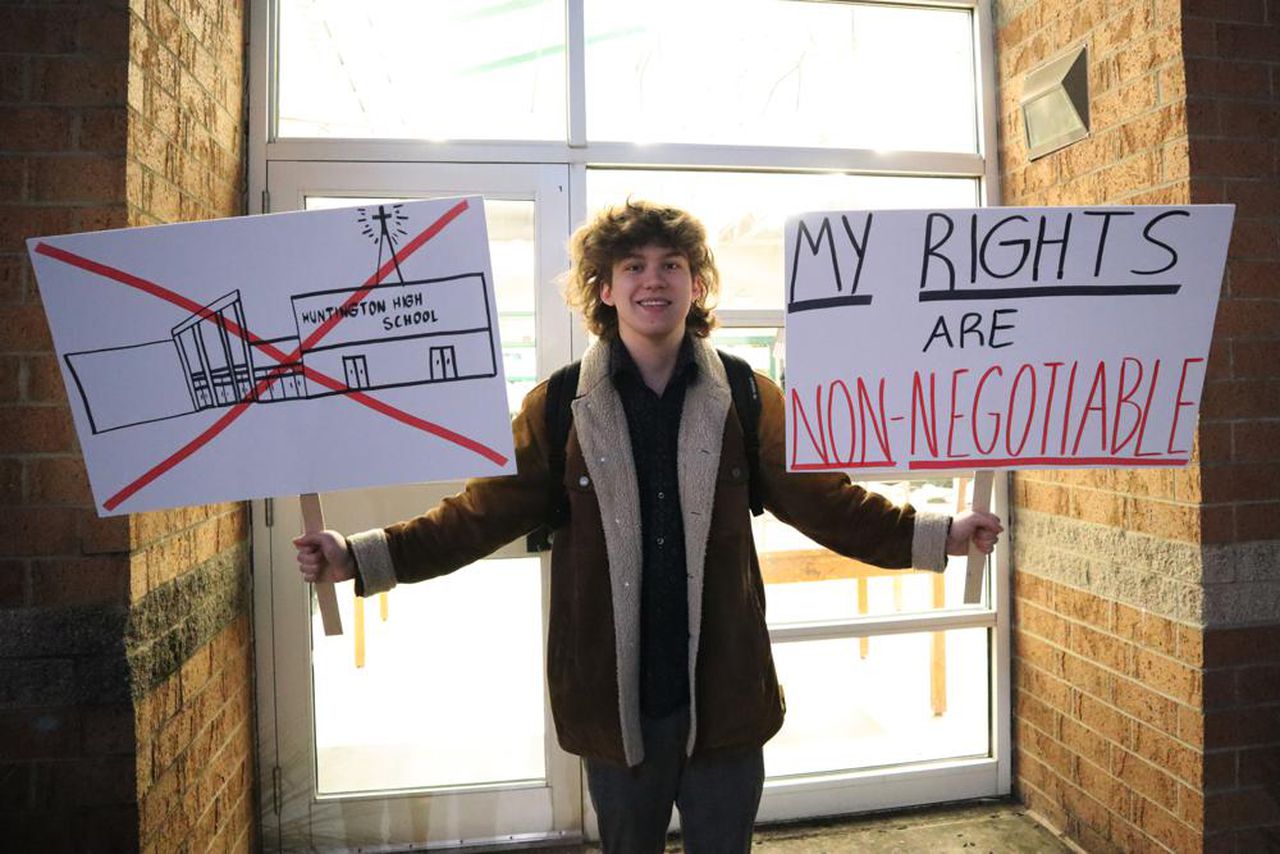 HUNTINGTON, W.Va. (AP) — Between calculus and European history classes at a West Virginia public high school, 16-year-old Cameron Mays and his classmates were told by their teacher to go to an evangelical Christian revival assembly.

When students arrived at the event in the school’s auditorium, they were instructed to close their eyes and raise their arms in prayer, Mays said. The teens were asked to give their lives over to Jesus to find purpose and salvation. Those who did not follow the Bible would go to hell when they died, they were told.

The Huntington High School junior sent a text to his father.

The answer, according to the U.S. Constitution, is no. In fact, the separation of church and state is one of the country’s founding basic tenets, noted Huntington High School senior Max Nibert.

“Just to see that defamed and ignored in such a blatant way, it’s disheartening,” he said.

Nibert and other Huntington students staged a walkout during their homeroom period Wednesday to protest the assembly. More than 100 students left their classrooms chanting, “Separate the church and state” and, “My faith, my choice.”

School security turned away reporters who tried to cover the demonstration.

“I don’t think any kind of religious official should be hosted in a taxpayer-funded building with the express purpose of trying to convince minors to become baptized after school hours,” Nibert said. During the walkout, he held a sign reading, “My rights are non-negotiable.”

Flowers said the event was voluntary, organized by the school’s chapter of the Fellowship of Christian Athletes. He said there was supposed to be a signup sheet for students, but two teachers mistakenly brought their entire class.

“It’s unfortunate that it happened,” Flowers said. “We don’t believe it will ever happen again.”

But in this community of fewer than 50,000 people in southwestern West Virginia, the controversy has ignited a broader conversation about whether religious services — voluntary or not — should be allowed during school hours at all. A group of parents, the American Civil Liberties Union of West Virginia and other organizations say the answer to this question is also no. They say such events are a clear violation of students’ civil rights.

“It is inappropriate and unconstitutional for the District to offer religious leaders unique access to preach and proselytize students during school hours on school property,” Freedom From Religion Foundation, a nonprofit that promotes the separation of church and state, wrote in a letter to the school district. The district cannot “allow its schools to be used as recruiting grounds for churches,” the letter reads.

Last week’s assembly at Huntington High featured a sermon from 25-year-old evangelical preacher Nik Walker of Nik Walker Ministries, who has been leading revivals in the Huntington area for more than two weeks.

During the assemblies, students and their families are encouraged to join evening services at the nearby Christ Temple Church. More than 450 people, including 200 students, have been baptized at the church, according to Walker, who said he was scheduled to go to another public school and nearby Marshall University soon.

Bethany Felinton said her Jewish son was one of the students forced to attend the assembly at Huntington High. She said that when he asked to leave, the teacher told him their classroom door was locked and he couldn’t go. He sat back down in his seat, uncomfortable. Felinton said he felt he couldn’t disobey his teacher.

“It’s a completely unfair and unacceptable situation to put a teenager in,” she said. “I’m not knocking their faith, but there’s a time and place for everything — and in public schools, during the school day, is not the time and place.”

“They can’t just play this game of, you know, ‘We’re going to choose this time as wiggle room, this gray area where we believe we can insert a church service,’” he said.

Walker said he has never contacted a school about coming to speak; it’s always the students who reach out to his ministry, he said.

“We don’t even have to knock on the door,” he said. “The students, they receive hope here (at Christ Temple Church) and then they want to bring hope to their school or to their classmates.”

Walker, originally from the small town of Mullens, West Virginia, has been traveling the state since he was 17 hosting church meetings at schools. He said he came to Huntington on Jan. 23 with plans to leave three days later but saw a need he felt compelled to address.

Walker said he sees a lot of “hopelessness” in the Huntington area: students struggling with addiction, anxiety and depression.

“When you see regions like this, then you really know they need the Lord,” he said, drinking a cup of hot tea with honey to soothe his throat after a couple of hours of preaching.

Tolsia High School freshman Mckenzie Cassell said she was excited for Walker to come to speak to her and her peers. She attends Christ Temple Church, where she said she is now seeing a lot more young people since Walker started his work in the schools.

“It’s awesome to see a lot of young kids coming,” she said.

Cassell’s guardian, Cindy Cassell said it’s been powerful to see someone make such an impression on young people in town.

“The kids want it and they’re ready for change in the right direction,” she said.

During Wednesday’s walkout, Nibert passed around a petition for students to sign that he plans to deliver to the Cabell County Board of Education. The petition asks that the board apologize to families for what happened and discipline the teachers who mandated that students go to the assembly. It also calls for the review or creation of a board policy pertaining to religion or religiously motivated speakers in schools. Around 75 students signed.

“I have never been prouder of a group of my peers than I am right now,” Nibert said, speaking into a megaphone during the protest. “When ordinary citizens find their circumstances to be unfair, they change them. And that’s exactly what we’re doing today.”