1.2 Billion Cash Reward for the identification of Key Al-Shabaab Leaders 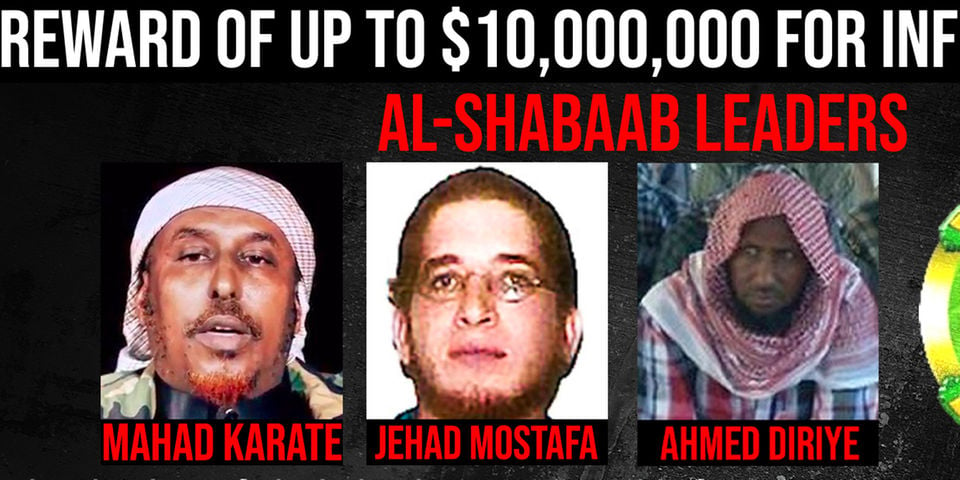 Terrorism the “unlawful use of violence and intimidation, especially against civilians, in the pursuit of political aims.” Has been a global threat, with the 2022 Global Terrorism Index (GTI) reveals that despite an increase in attacks, the impact of terrorism continues to decline. “In 2021, deaths from terrorism fell by 1.2% to 7,142, while attacks rose by 17%, highlighting that terrorism is becoming less lethal. Two thirds of countries recorded no attacks or deaths from terrorism the best result since 2007 – while 86 countries recorded an improvement on their GTI score. The number of deaths has remained approximately the same for the last four years,” Office for the Coordination of Humanitarian Affairs reports.

The United States Department of State’s Rewards for Justice (RFJ) program has increased its reward offers to up to $10 million each for information leading to the identification or location of al-Shabaab key leaders Ahmed Diriye, Mahad Karate, and Jehad Mostafa. The reward fund converts to 1.2 billion Kenyan shillings for one the identified and 3.6 billion for all.

“RFJ is also offering a reward of up to $10 million for information leading to the disruption of the financial mechanisms of al-Shabaab. This announcement marks the first time that the Department has offered a reward for information on al-Shabaab’s financial networks,” the US Embassy in Kenya stated in a press release.

The US embassy in Nairobi says the three are responsible for numerous terrorist attacks in Somalia, Kenya and neighbouring countries.