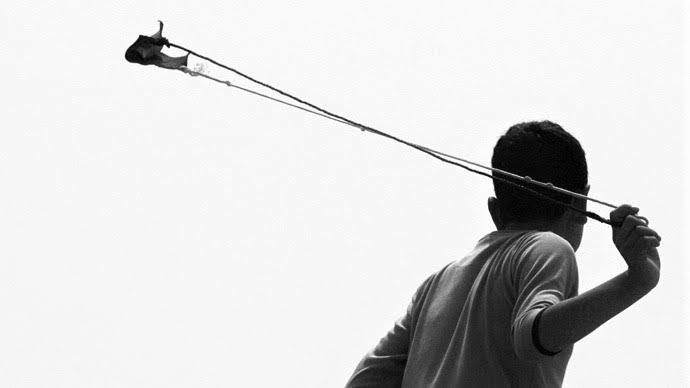 “Not a blacksmith could be found in the whole land of Israel, because the Philistines had said, “Otherwise the Hebrews will make swords or spears!” So all Israel went down to the Philistines to have their plow points, mattocks, axes and sickles sharpened. The price was two-thirds of a shekel for sharpening plow points and mattocks, and a third of a shekel for sharpening forks and axes and for repointing goads.

So on the day of the battle not a soldier with Saul and Jonathan had a sword or spear in his hand; only Saul and his son Jonathan had them.” (1 Samuel 13: 19 – 22 And 1 Samuel 17:1 ff) New International Version.

The story of David taking on Goliath, is perhaps, in my view, one of a kind, that epitomizes the emergence of nations and the rising of a militant church which is ready and willing to move from the backyard to the front lines of the battle. This Church defies the norm and goes against the grain. It pushes against the wind of obscurity; the challenges of her economic environment and amidst many other odds, seeking to deliver on her great commission. It is indeed, a story of faith, vision and focus.

There is a shift in the atmosphere and i see God raising a new breed of people (the little knowns, the despised and insignificant – a new generation) who are poised to use very unconventional means of fighting, in order to execute their God given mandate without fear of contradiction.

The ‘David and Goliath’ episode can as well fit into a song or be scripted into a fine play or skit. It has been mimed or ‘cartooned’ into very super sunday school lessons for kids and has been used to bring out great sermons all over the place.

But come to think of it, David does not disappoint at all, on one of his normal days and routine, and while having taken food to his brothers out in the battle field, that he quickly finds out about this Philistine giant who has been terrorizing the armies of Israel and had set them on a flight mode for close to 40 days.

David is however challenged by the fact that, at that time, during King Saul’s era, and almost in the entire community, there was grave scarcity of iron weapons/instruments – because there was no longer any blacksmith! There were no spears, no swords, no iron items apart from a few that only served the King and his son Jonathan (verse 13). The Philistines had confiscated these items perhaps to ground and weaken Israel both economically and in their defence force. This is what the enemy can do! He first plunders everything then comes around and purports to sell you what belonged to you ( John 10:10, Isaiah 55:1-2)

The few iron items that were available, could only be sharpened at a fee, in the hands of the same Philistines who had taken from them. Blunt weapons will always slow down and make work cumbersome (Ecclesiastes 10:10). The devil would rather have you fight but only as long as he keeps your calling and giftings blunt.

David’s win and victory is therefore significant because it is an indication that only God’s hand must have been involved. David’s win is supernatural and it must have been by divine intervention ( Zechariah 4:6, Psalm 124 – 126). Compared to David, Goliath was extremely experienced in warfare and had all the armour and confidence if not being obnoxious, to challenge not only the armies of Israel but the God of Israel. He dares to defile the armies of Israel and he wasn’t careful to bet on anyone who would challenge him back.

Then of course we see David desperately trying to fit into Saul’s military attire, perhaps to look more prepared and polished as many would prefer, but only later to resort to his own ‘divine idea’ and ‘divine strategy’ – that of “A staff, a Sling and Five Smooth Stones!” or “Sticks” according to Goliath’s illusion. (1Samuel 17:38-40). Sometimes it takes hearing from God, to following a particular line of instruction, in order to bring down our Goliaths.

The David church is fully aware that without God, she cannot by any means, combat any known Goliath. The David church must keep confessing and never forget her battle password; “You come against me with sword and spear and javelin, but i come against you in the name of the Lord Almighty, the God of the armies of Israel whom you have defiled!” (1 Samuel 17: 45-46, 2 Corinthians 10:3-5).

The extermination of blacksmiths is, in my opinion, the enemy’s greatest strategy against Israel – which is a type of the church. Blacksmiths are symbolic of intercessors. They represent the Armory Factory – the Production Industry.They carry the spirit of reproduction. They are our midwives. The church has in the recent past lingered in circles of backsliding and I am afraid that even the clerics have not been spared. We have hindered reproduction and killed revival. We have only remained with a few ‘iron weapons’ which have gradually gone blunt.

We have remained with the shells of the ‘Orthodox’ church; the traditional church; our home church; where our great grand father attended, and where our late grandmother used to sing in choir; and where clapping of hands in praise to God is prohibited; and where musical instruments are deemed noisy and secular, and the list goes on! We have become complacent and have gone quiet on rebuking sin! We have preferred to keep our programs and keep our congregations by not stepping on ‘murky waters’. This is still costly as well – My thoughts? Remember it is God who calls, but iron (man) sharpens iron (man) – Proverbs 27:17. We have failed to sharpen our own, and the devil has put us to the task of having to pay for it!

It is until the Davids will rise from the backyard and defy the odds of inexperience and obscurity and dash towards the enemy before he attacks, that we shall experience supernatural intervention and breakthrough. We must fight an offensive rather than a defensive warfare. We must come out strongly and believe that our little experiences with the Bears and the Lions were still a presentation of Goliath at different levels and dimensions. Don’t wait until you face the real Goliath; start taking every small battle seriously and trust me; all those continuous assessment points will add up onto your main examination results some day!

Finally, it will interest you to learn that while David had already been to Saul’s house on several occasions, after being anointed by the prophet Samuel, Saul is evidently not aware that it is the same David who has just killed Goliath! Saul is definitely starstruck by David that this whole ‘game’ could only be done in a few moments by a single stone!? Saul had to literally ask “whose son is this?” (1 Samuel 17:54-58).

My prayer is that God will reintroduce you to the world, by virtue of what He is about to do in you and through you in this season. May you be the David that Israel has long been waiting for and may God use you to bring down what has been a veil and cloud of despair over the nations! (1 Samuel 17: 32).

You don’t have to be a celebrity to slay your Goliath, but as Apostle Peter would put it, I equally urge you to “make certain your election and calling because by doing so, you will never stumble!” (2 Peter 1:10).