President Uhuru Kenyatta on Monday evening held talks with Chinese Special Envoy for the Horn of Africa Amb. Xue Bing who paid him a courtesy call at State House, Nairobi.

Amb. Xue commended Kenya for the role it has continued to play in fostering peace and stability in the Horn of Africa.

“Kenya is a powerhouse in the Horn of Africa in terms of peace and security. We appreciate the important role Kenya has continued to playing in this endeavour,” said the Chinese Special Envoy for the Horn of Africa.

Amb. Xue said China looked forward to working closely with Kenya towards stability in the region, adding that his country has come up with a proposal to hold a conference that will bring together all countries in the region to discuss peace and development.

President Kenyatta assured the Chinese special envoy, who was accompanied by the Chinese Ambassador to Kenya Zhou Pingjian, that Kenya was ready to work with China and other stakeholders in support of regional peace and prosperity.

“You can count on us as dependable allies and partners in the efforts to bring peace, stability and prosperity in the region. We are doing this because we know a peaceful and stable Horn of Africa region means a peace and stable Kenya,” President Kenyatta said.

The President and the Chinese special envoy agreed on the need for home-grown solutions to the problems affecting the Horn of Africa region.

They called on the different parties involved in conflicts in Ethiopia, Sudan, South Sudan and Somalia to embrace dialogue as the best way of resolving their differences.

President Kenyatta and Amb. Xue also applauded the enhanced bilateral ties between Kenya and China that have seen the two countries strengthen their cooperation both at the bilateral and multilateral levels for the mutual benefit of their respective citizens.

Amb. Xue, who was appointed the Chinese Special Envoy for the Horn of Africa in January this year, briefed President Kenyatta on his vision for the region. 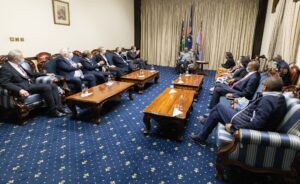