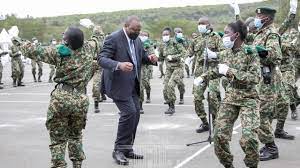 President Uhuru Kenyatta presided over, the passing out parade of the National Youth Service (NYS) today. The ceremony held in Gilgil Nakuru, saw 9,464 graduates become part of 130,000 grandaunts of the programme during President Kenyatta’s tenure. The grandaunts were trained on paramilitary, character development, and public service in a 6-month programme.

In his speech, the President was proud that the government has upscaled the absorption of the grandaunts into various sectors within it. “I am glad that after my directive of last year, the administration has secured 2,649 job placements for NYS graduates. And of this KDF and the National Police service have recruited 500 each, Kenya Prisons has absorbed 61, while the Kenya Port Authority has concluded their interviews for 200 whom they wish to employ. This does not include the 700 who have already been employed by NYS itself,” President Kenyatta.

The president further urged all employers to give preference to the grandaunts.