Archbishop Jackson Ole Sapit : “Let us shift our narrative from our differences to our unity”

Anglican leaders are gathering from all 47 counties of the Republic of Kenya to deliberate on the mandate of the church to keep the unity of the Spirit through the bond of peace and to build their capacity to offer effective guidance to the Nation in the period before, during, and after the 2022 General Election. 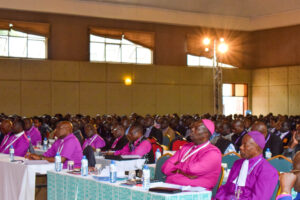 The conference themed: Wholesome Living: A wholesome Ministry for a wholesome nation: Road to 2022 General Elections and Beyond, entered its 2nd Day, today, with each keynote speaker discussing how the Church can build consensus, develop strategies, and speak in one voice on key issues of concern about securing a peaceful General Elections.

“We are gathered here to reflect on our role as a Church to the Nation and understand how do we account for our action.” Rev. Canon Dr. Rosemary Mbogo. “Our proximity to the grace of God can not be taken for granted.” She said.

Anglican Church of Kenya, Archbishop Jackson Ole Sapit said that the measure of a Christian Church is located in its ability to remain united. “My first call is to the church’s leadership: May the Bishops and the leaders of our churches have the wisdom to speak with one voice. We need to shift our narrative from our differences to our unity. Let us stand for peace and speak with one voice.” Archbishop Ole Sapit.

The church leaders called on the Christian community to give up their comfort to safeguard the wellness and safety of the other. They said wholesome living is an accountability check into every aspect of our lives as well as a check on the systems that support our lives.

“Every part of Kenya belongs to God, we must therefore safeguard the entire country.” Rev. Canon Rosemary Mbogo

“As political parties look for their agents to represent them during elections, whose agent will the church of Christ be?” Jackson Ole Sapit

In his presentation on elections in Kenya: The road towards the 2022 election, IEBC Chairman Wafula Chebukati said that the democratic, free, and fair elections are a reality, therefore, the role of bishops and clergy in the election process is very critical and all have a role to play.

“About 95% of materials required for elections have already been procured. On voter registration, 2,554,447 new voters have been registered, and IEBC will open voting in 12 diaspora countries to take part in the presidential elections only as provided in the constitution.” Wafula Chebukati.

“A good register gives credibility to elections. We don’t have sufficient legislation to operationalize chapter six but one of the reasons we require parties to submit lists of aspirants by 28th April is so that we can share these with EACC Kenya.”

Chebukati also mentioned that accreditation of voting observers, voter educators, and the media is ongoing online. “To enhance transparency, media will have direct access to real-time election results data.”

Responding to a clergy’s question about whether there are any ideological-based parties from the existing 87 registered ones, here is what the Registrar of Political Parties had to say;

She called upon the Church to bring about a political-cultural transformation in which we see others as important starting with the ongoing party nominations.

“As the church remains neutral, you have an obligation to educate Kenyans. Be agents of transformation.” Ann Nderitu.

Making an observation on the general trends observed in politics and responding to the question: “what is the role of the church?” she said,

“There has been a lot of soul erosion that has happened in this county. To the point where when bad things are done, they are dismissed as “just politics”. The church needs to bring back soul into the political space and have cultural transformation.”

“We call on the government and especially the IEBC to raise to the occasion and go beyond the expectations of Kenyans in the whole process of the elections.”

The Executive Director of the Future of Kenya Foundation, Cyprian Nyamwamu, who was the first keynote speaker for the afternoon’s session began with a detailed socio-political outline of the current state of the nation saying, “Parliament is increasingly populated by socialites, comedians, and entertainers. Even professors are not contesting to improve the political pillar. Aspirants are vying because it is lucrative.”

Chebukati said from 29th May to 7th June, the candidates will present their papers for clearance to contest at national and county levels after which the campaign period kicks in and stops 48 hours before the August polling.