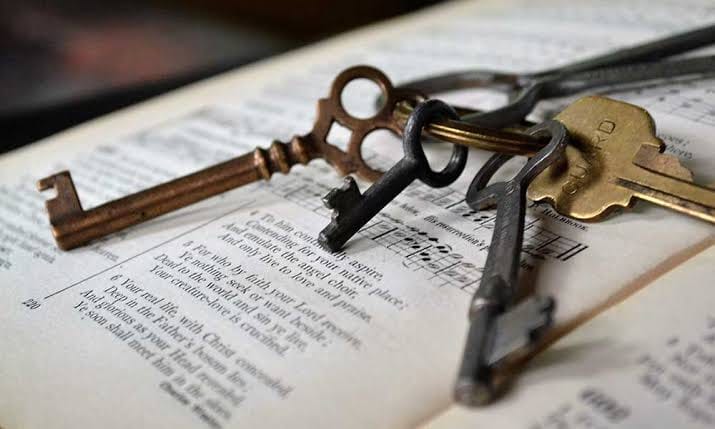 Matthew 16:19 NIV
I will give you the keys of the kingdom of heaven; whatever you bind on earth will be bound in heaven, and whatever you loose on earth will be loosed in heaven.
What comes to mind when you think of keys? Access, authority, control, ownership, and several other things.
Jesus tells his disciples us included that he gives them the keys of the kingdom. Take note that it is not the keys to the kingdom but rather the keys of the kingdom. We are already part of the kingdom because we came through Jesus the door, but once in the kingdom we need keys to operate within the power and authority of this kingdom.
Notice that after Jesus speaks of keys he talks about binding and losing on earth and in heaven. This tells me that though the keys are of the kingdom of heaven, they have authority and effect here on earth, and we have them.
What then are these keys?
They are the laws of the kingdom, the principles of the kingdom, the systems of the kingdom.
When Jesus says that’s it is more blessed to give than to receive, that’s a kingdom principle and key that when activated here on earth releases his blessings from on high. When Jesus says that the greatest among us must be the least and servant of all, that’s a kingdom principle and system of leadership that when activated here on earth releases favor and wisdom from on high.
Have you ever tried unlocking a door using the wrong key? It is quite frustrating. That’s how some are attempting to operate, using the wrong worldly keys to operate within the heavenly kingdom. They don’t work!
May we know the keys we have been given and how to use them.
Reflections
Are you walking in the revelation that you have been given the keys of the kingdom?
It’s one thing to have keys and it’s another thing to know which key to use on which door, do you have an understanding of how to use the keys of the kingdom?
What must you do to grow in your understanding of the kingdom keys you have been given and how to use them?
Share
Facebook
Twitter
Pinterest
WhatsApp
Previous articleRussian Evangelical Alliance apologises for Putin’s military invasion of Ukraine
Next articlePope Francis To Visit South Sudan