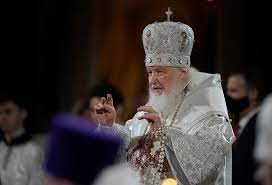 The UK government has sanctioned the head of the Russian Orthodox Church, Patriarch Kirill, in its latest round of measures amid Russia’s invasion of Ukraine.

Announced on Thursday, the government said Patriarch Kirill had been sanctioned “for his prominent support of Russian military aggression in Ukraine.”

Patriarch Kirill had previously publicly supported Vladimir Putin’s military actions in Ukraine. He sees the war as part of a struggle against sin and pressure from the liberal West.

Last month, Pope Francis said he had warned the Russian church leader not to “turn himself into Putin’s altar boy.”

Commenting on the sanctions, Foreign Secretary Liz Truss said: “Today we are targeting the enablers and perpetrators of Putin’s war, who have brought untold suffering to Ukraine, including the forced transfer and adoption of children.

“We will not tire of defending freedom and democracy, and keeping up the pressure on Putin, until Ukraine succeeds.”