The Body of the former President Mwai Kibaki has arrived at the Parliament Buildings in preparations for a public viewing.

According to the Funeral Planning Committee, Kibaki’s body will lie in State for three days to allow Kenyans adequate time to pay their last respects to the former Head of State. 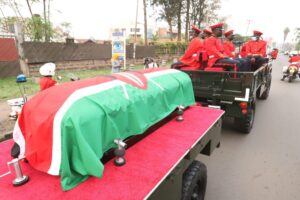 His body was driven to the parliament in a Military Gun carriage mounted by the Kenya Defense Forces.

A Military Guard of Honour was mounted along Parliament Road for the entry procession into Parliament.