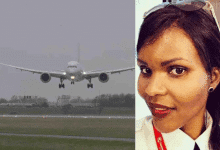 This past weekend Kenyan pilots made the nation proud as they landed planes amid raging storm Eunice. While at the Heathrow Airport, pilot Karuri encountered the stop that was raging strong winds at speeds of 70 knots. The pilot gives credit to her the training she received from the airways; that enabled her to steer the plane on to the runway.

The UK High Commissioner to Kenya, Jane Marriot amongst other Kenyans took to social media to applaud the captain. Kenya Airways uploaded the video to congratulate the team on twitter.