The Seven judge Supreme Court bench is set to issue its judgment on the appeal case on the Building Bridges Initiative (BBI) on Thursday, March 31.

The BBI appeal was filed by Attorney General Kihara Kariuki and two others who hold the view that all clauses in the Kenyan Constitution are amendable under the President as the Head of State, who has the right to initiate change to the constitution. They had challenged the Court of Appeal’s August 20, 2021 decision that threw out the BBI constitutional push, a judgment that was seen as having far-reaching implications on President Uhuru Kenyatta’s succession race. 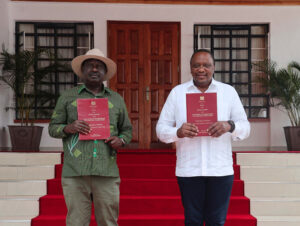 When President Uhuru Kenyatta and Former Prime Minister Raila Odinga appended their signature of support of BBI there was no doubt the duo were picking a strategic seat as co-drivers of the constitution amendment push deemed politically decisive to the August race to the statehouse. But having since then suffered a serious setback in nullification of the BBI process at the High Court and in the hands of the Court of Appeal judges that upheld the verdict,

President Uhuru Kenyatta has been consistent that the country is in a constitutional moment and that the move to change the supreme law had just been paused but will be realized in the fullness of time. In his address to the nation during the Jamhuri celebrations at Uhuru Gardens, the President said,  “BBI is just a dream differed  one day, someday it will happen because just a the country can not survive ethnic majoritarianism and exclusion just in the same breathe it cannot survive unfair, and skewed representation.”

Since then political players appear to have moved on to other top priorities leading to the forthcoming general elections in August, however, the overriding question is; would BBI still be a factor in the August 9th Polls should the bench overturn the Appellate Court verdict?

According to Dennis Moturi an advocate of the High Court and political analysts, BBI will have a very minimal impact politically, but legally yes. “Whatever the decision it is, first it will affirm the principles of law with finality. It will either confirm the decision on the court of appeal or change some of the findings of the court of appeal, ultimately, the Supreme Court will pronounce itself with finality on the various constitutional values.” He said.

Some pro-BBI members of parliament have reiterated that they are ready for elections with or without the BBI but when they win the elections some aspects of the BBI will be implemented.

“You can conduct a referendum together with the elections. It is still allowed by law so long as the right process has been followed and there will be no further challenges in any constitutional Court in future.” Hon.Dan Maanzo, MP Makueni.

In the much-anticipated ruling that may have major consequences for the August 9 presidential and parliamentary polls, the court will either appeal the ruling of the Court of Appeal that rendered the BBI process unconstitutional, null and void or invalidate the lower court’s ruling altogether.

If the Seven judge bench upholds the Court of Appeal’s verdict then political analysts argue that such an option will deal the final death nail to the BBI push and extinguish the hope of political players striking coalition agreements based on an expanded executive, such a verdict will mark a major political victory for Deputy President William Ruto who has been the top BBI critic.

“Constitutional amendments must have timelines – strict timelines so that you don’t inconvenience the country. We can’t hold the country at ransom because of BBI, therefore, I am not too worried about the Supreme Court determination.” Hon. Mutula Kilonzo, Senator Makeuni County.

Some of the key issues for determination at the apex court include whether a sitting president can initiate a popular constitution amendment drive and whether Kenya’s 2010 constitution falls under what has come to be famously dubbed “the basic structure doctrine” a finding upon which the High Court and the Appellate judges blocked some key suggested changes to the supreme law by the BBI bill.

Familynews.Today will follow the proceedings and keep you up-to-date.