Faces Around the Cross: Simon Peter 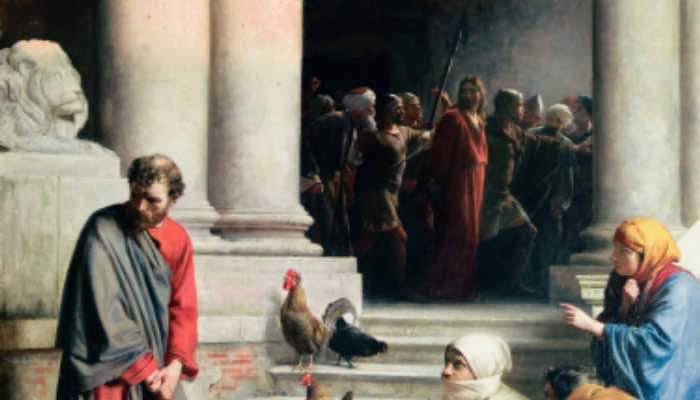 Matthew 26: 33 -35
Peter answered and said to Him, “Even if all are [g]made to stumble because of You, I will never be made to stumble.”
34 Jesus said to him, “Assuredly, I say to you that this night, before the rooster crows, you will deny Me three times.”
35 Peter said to Him, “Even if I have to die with You, I will not deny You!”
And so said all the disciples.
I love Peter, he is one of those characters in the bible that is quick to act and what you see is what you get. Think about this, when Jesus appears to the disciples walking on water, it was Peter who spoke first, daring Jesus to call him on the water. When Jesus was being transfigured, it was Peter who suggested that they build tabernacles, one for Jesus another for Moses and another for Elijah. Remember just before he was called he had fished the whole night and caught nothing, but at the word of Jesus he cast out his nets one more time. Peter was the one who cut off a man’s ear when Jesus was arrested in the garden of Gethsemane.
Peter had walked with Jesus and in his mind he was totally sold out and nothing would persuade him otherwise. The problem was that Peter put his faith in his capabilities, remember he was a man of action. So, when Jesus talks about the disciples stumble and forsaking him, Peter thinks “Not me!” He even goes on to tell Jesus that others may forsake him but as for him, he was ready to die with Jesus.
To put our trust and faith in our accomplishments or personality, to trust in our own strength, is folly, and it will always lead to a ship wreck. Remember Jesus told us that a part from him, we can do nothing!
When the moment of truth comes, Peter, depending on his own strength tries to defend Jesus by cutting off the ear of a servant. Jesus rebukes Peter and asks him to put his sword away, for those who live by the sword will die by the sword. This was not the way of Jesus, Peter had to learn another way.
Can you imagine what Peter felt when the rooster crowed after he had denied Jesus for the third time and Jesus looked at him?
That must have broken him, he had done the very thing he had declared to the Lord he would never do. He had failed, he had denied and forsaken the Lord at his hour of need just as the Lord had predicted, and he wept bitterly.
Have you ever looked down at someone because of the kind of sin they committed, thinking that it was beneath you only for you to do the very same thing you had said you would never do? That was Peter.
As believers, we cannot depend on our strength or our experiences or resources. We must always depend on the Lord because without him, we can do nothing.
I love that Peter was restored, and we see him in the book of Acts taking the lead to preach on the day of Pentecost, this time not depending on his own strength but depending on the Spirit of God.
Reflections.
What is that one thing you thought you would never do, but you ended up doing, and how did that make you feel?
In what areas have you been depending on your own strength, qualifications or experience rather than fully depending on God? How did that turn out?
Peter denied Jesus, went back to fishing, but he was restored and became a leader on the Acts Church. What lessons can you learn from that?
Share
Facebook
Twitter
Pinterest
WhatsApp
Previous article
Do you have itchy ears? – The truth vs. what you want to hear
Next article
There are fears we need to have