Speaking to the faithful in St Peter’s Square on Sunday, Pope Francis said he regretted having had to postpone a trip to Congo and South Sudan because of a painful knee.

The 85 year old pontiff said he felt “great sorrow” after canceling his trip initially planned for July 2 to 7 on doctors’ advice.

“I want to speak to the people and the authorities of the Democratic Republic of Congo and of South Sudan: my dear people, with great sorrow, because of the trouble with my leg, I have had to postpone the visit in your countries which was scheduled for the first days of July. I really feel a great regret to have to postpone this trip which I cared so much about. I apologise to you for this, let’s pray together so that with the help of God and with medical care I shall visit as soon as possible. We are confident about this,” said the Pope. 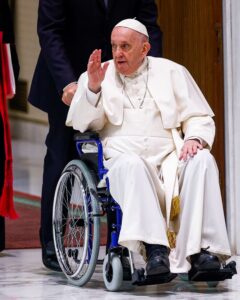 The pope has been using a wheelchair for a month due to strained ligaments in his right knee that have made walking and standing difficult and painful.

He has refused so far to get surgery, and has instead received injections.

He has cancelled numerous engagements and postponed a scheduled trip to Lebanon in June but it is not yet clear if the pope’s visit to Canada later in July will go ahead as planned.