Greats Battles of the Bible: Gideon’s 300 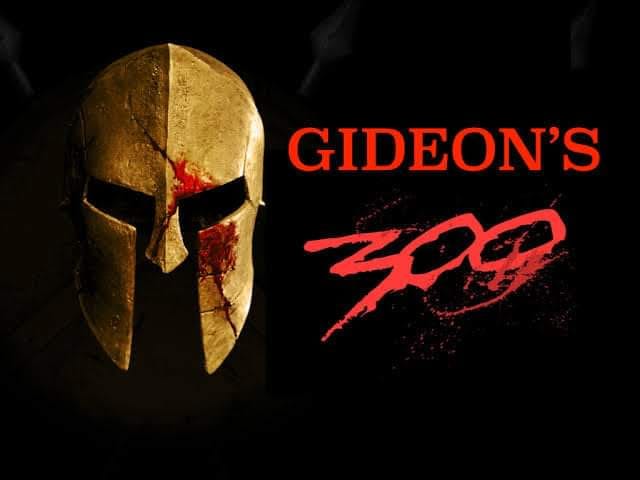 Judges 7:7
7 And the LORD told Gideon, “With the three hundred men who lapped I will rescue you, and will hand over the Midianites to you. Let all the other people go, each man to his home.”
The account of Gideon is an astonishing one that we draw lots of inspiration from. That the Lord would use only 300 men out of an army of thirty-two thousand to win a battle is quite remarkable.
The Midianites had terrorized the Israelites for seven years. They would come during the harvest season, destroy the harvest and basically just take over the land. The bible says they would come with their livestock and tents,, and they would be as numerous as locusts. Things would be so bad that the men of Israel would run for their lives and hide in the caves. This same Midianites are the ones Gideon went up against with only 300 men.
Remember, when we meet Gideon, he is in hiding. He has such a low self-esteem because of what he has believed about himself and his family. When the angel tells him to deliver Israel, he is surprised. This is the same Gideon that God uses to deliver Israel.
Though we talk a lot about Gideon’s 300 men, it is the method that God used to give them victory that amazes me and makes me wonder if the battle was really against the Midianites or within the minds of the Israelites. God gives them victory in the most unconventional way.
Judges 7:19-22
19 So Gideon and the hundred men who were with him came to the edge of the camp at the beginning of the [f]middle watch, when the guards had just been changed, and they blew the trumpets and smashed the pitchers that were in their hands. 20 When three companies blew the trumpets and broke the pitchers, they held the torches in their left hands, and the trumpets in their right hands to blow, and they shouted, “A sword for the LORD and for Gideon!” 21 Then each stood in his place around the camp; and the entire [Midianite] army ran, crying out as they fled. 22 When Gideon’s men blew the three hundred trumpets, the LORD set the sword of one [Midianite] against another even throughout the whole army; and the army fled as far as Beth-shittah toward Zererah, as far as the border of Abel-meholah, by Tabbath.
To me, this was a test of faith in God and His word. How do you go against an army that has terrorized you for 7 years with trumpets, pitchers and touches? How do 300 men who have seen 31,700 of their brothers who had come to fight alongside them go back home much of them 22,000 to be exact because they were overcome by fear, still go on to fight?
Would they still believe that God was with them, and they would win the battle? Yes, they did and God gave them the victory.
If we believe, then will we obey, no matter how unconventional God’s instructions are?
Share
Facebook
Twitter
Pinterest
WhatsApp
Previous articleSleep Paralysis: Chained to My Bed
Next articleNew Cervical Cancer Equipment