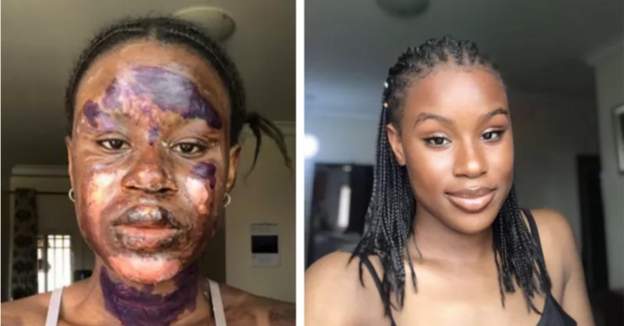 Nigerian medical student Princess Ezeani has opened up about her remarkable recovery from first degree burns caused by a cooking gas explosion. She told the BBC how the accident that happened six months ago had made her stop attending classes at university.

The medical student had dreams of modelling and feared that the burns would make it impossible to get contracts. The accident happened at her family house in Abuja while she was cooking.

Her mother has been applying herbal remedies including honey and aloe vera on the burns for six months. Ms Ezeani’s photo on social media elicited mixed reactions with some people happy for her recovery while others accused her of undergoing plastic surgery.

She says other people have accused her of applying makeup to cover her burns. Ms Ezeani has spoken of suffering constant nightmares after the accident, and has thanked her family and friends for supporting her to fully recover physically and mentally.