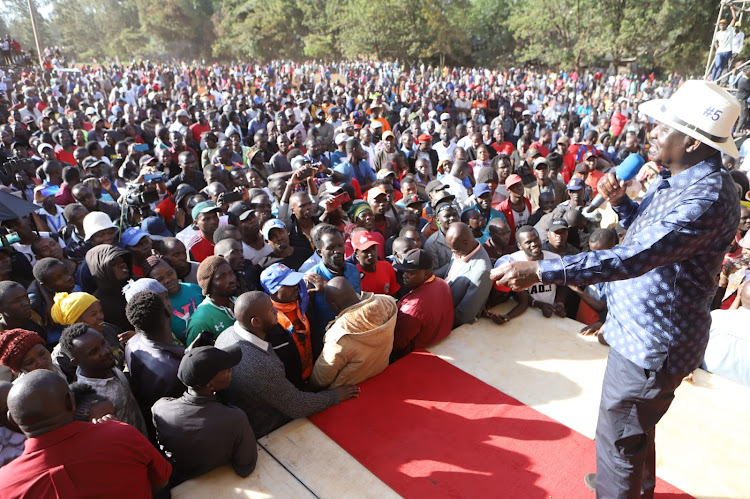 While speaking on Wednesday December 7 at Kamukunji grounds in Nairobi the former premier called out President William Ruto for suspending the four commissioners and vowed to destroy any plans by Ruto to have his conduits run any forthcoming elections in the country.

The Azimio la Umoja One Kenya Alliance Leader claimed that no elections will be held in the country until Independent Electoral and Boundaries Commission (IEBC) Vice Chair Juliana Cherera and three other commissioners are reinstated.

“Ruto needs to be stopped from putting in place a commission that will be his puppet. If not, then there will not be any elections,” Odinga stated.

The ODM leader gave the President until the end of the year to reverse the changes and promised that no consultative forums would be held until 2023.

President William Ruto had on December 2 suspended the Cherera four commissioners and formed a tribunal to investigate them.

“The mandate of the tribunal shall be to consider the petition for the removal of (1) Juliana Whonge Cherera, (2) Francis Mathenge Wanderi, (3) Irene Cherop Masit and (4) Justus Abonyo Nyang’aya from office as members of Independent Electoral and Boundaries Commission (IEBC) and to inquire into the allegations therein,” said President Ruto in the Special Gazette Notice Number 258.

“In the discharge of its functions, the tribunal shall (a) Prepare and submit a report and its recommendations thereon expeditiously; and (b) exercise all the powers conferred upon it by law for the proper execution of its mandate,” said the Head of State.

IEBC Vice Chairperson Juliana Cherera and commissioner Justus Nyang’aya have so far resigned from the electoral body following their suspension.

The commissioners are being accused of attempting to subvert the will of the people with regard to the August 9 presidential elections.