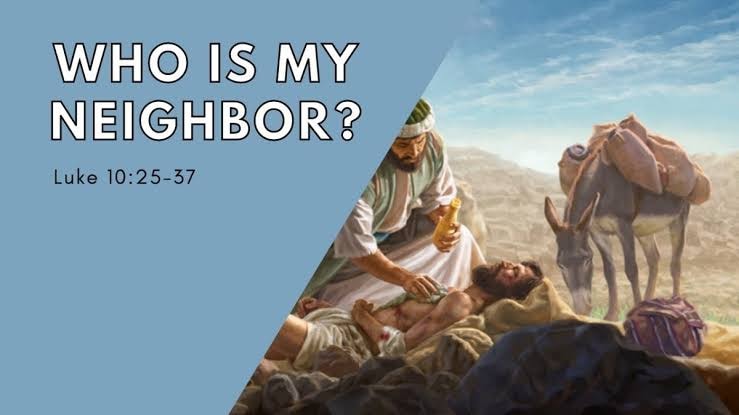 Luke 10:36‭-‬37, NKJV
So which of these three do you think was neighbor to him who fell among the thieves?” And he said, “He who showed mercy on him.” Then Jesus said to him, “Go and do likewise.”
When Jesus told the story of the good Samaritan, it was a response to a question; Who is my neighbor?
A teacher of the law asked Jesus what to do to attain eternal life, and Jesus responded by asking him what is written in the law. He said; “‘You shall love the Lord your God with all your heart, with all your soul, with all your strength, and with all your mind,’ and ‘your neighbor as yourself.’ ”
When Jesus tells him to go do this, he asks the famous question, “who is my neighbor?”
We as well ask this question sometimes to try to shift the responsibility away from ourselves.
The good Samaritan saw a stranger, someone considered an enemy because Jews and Samaritans did not see eye to eye. This was a man distressed and at the brink of death. Though he did not know him, he was moved with compassion to reach out and help him.
The good Samaritan preserved life where the bandits sought to take it and the priest and the Levite cared less about it.
The Good Samaritan gave where the bandits stole and where the priest and the Levite chose not to give nor be involved.
The good Samaritan chose to care where the bandits the priest and the Levite chose not to care.
He spent his time used his resources and his networks to preserve a life, the life of a stranger someone considered an enemy.
Jesus tells the teacher of the law to go and do likewise.
In a world today where many claim to love God but have no concern for their neighbor, that’s a huge challenge to us.
The world is distressed in fear and confusion, with many people hurting. Will you and I be the bandits and take advantage of the situation to steal the little they may have and care less about them?
Will we act like the priest and the Levite showing how much we love God through our empty religious rituals, and yet, we have no love or regard for our fellow man not wanting to get involved in their life?
I pray we will be like the good Samaritan, ready to love people and to use our time and resources to preserve life just as God has done for us.
Love your neighbor as yourself.
Reflective Thoughts.
Who is your neighbor?
Bandits priest, Levite or good Samaritan, who of these would you want to be known as?
What then must you do? Go and DO…. key word is DO….. Go and DO likewise.
Share
Facebook
Twitter
Pinterest
WhatsApp
Previous article
Report: Only 9% of Kenyans have permanent, full-time jobs
Next article
Practical Love: Love your Enemy