Faces Around The Resurrection: Mary Magdalene 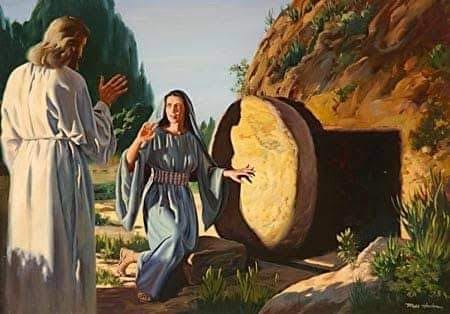 John 20:14‭-‬16 NKJV
Now when she had said this, she turned around and saw Jesus standing there, and did not know that it was Jesus. Jesus said to her, “Woman, why are you weeping? Whom are you seeking?” She, supposing Him to be the gardener, said to Him, “Sir, if You have carried Him away, tell me where You have laid Him, and I will take Him away.” Jesus said to her, “Mary!” She turned and said to Him, “Rabboni!” (which is to say, Teacher). ”
Mary Magdalene was the first person to see the risen Christ. She became a faithful disciple after Jesus cast out seven demons from her. Not only was she a faithful disciple, she also supported the ministry of Jesus financially. When Jesus was arrested and later crucified his disciples deserted him, but a group of women did not and Mary Magdalene was one of them.
Not only was she at the cross, she was also there with the other women when the body of Jesus was taken off the cross and prepared for burial by Joseph and Nicodemus.
She was at the tomb when they laid the body of Jesus there and the stone was rolled at the entrance.
She did not stop there, she was also among the women who had gone to the tomb to anoint the body of Jesus with spices on that third day that he rose from the dead.
After telling the disciples that Jesus is risen and Peter and John run to the tomb to confirm, it was this same Mary Magdalene that remained at the tomb weeping, and she saw two angels and then Christ appeared to her.
She who had once been tormented by seven demons became the first to see the risen Christ.
Her testimony is one of commitment not just by words but buy her actions. and possessions and her commitment was all the way to the end.
May we remain committed to Christ as she was even when we do not understand.
Reflections.
How committed are you to Christ in the midst of persecution?
How committed are you to Christ when you do not understand what is happening around you?
What is the greatest lesson you learn from the women disciples of Jesus?
Share
Facebook
Twitter
Pinterest
WhatsApp
Previous article
He suffered according to the scripture
Next article
School: Corporal Punishment & Drug Tests