The East African Community Council of Ministers has now approved the admission of the Democratic Republic of Congo into the regional bloc in a bid to boost its trade, social cohesion, and security. 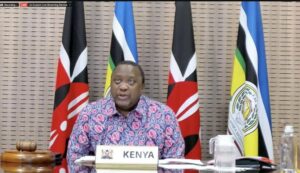 As early as June 2019, Kinshasa had expressed its willingness to join the organization in a letter to Paul Kagame, then-current chair of the EAC Heads of State Summit.

Among the advantages for the DRC are the integration of the east of the country into the common telecommunications space, which will reduce costs with neighboring countries; several administrative facilities and a reduction in charges for the commercial and economic activities of Congolese citizens, as well as facilitating their mobility in the eastern countries.

The DRC is also expected to benefit from reduced tariffs for goods received at the ports of Mombassa (Kenya) and Dar es Salaam (Tanzania).

In addition, in February, the EAC Heads of State Summit approved the addition of French as an official language of the community, alongside English and Swahili.

Kinshasa could also benefit from the application of the EAC’s Collective Security Pact, with the assistance of countries such as Kenya and Tanzania, in the fight against several rebels in the central African country.